For Christmas this year, Candied Jansen got me a Raclette Grill.  This one to be exact. 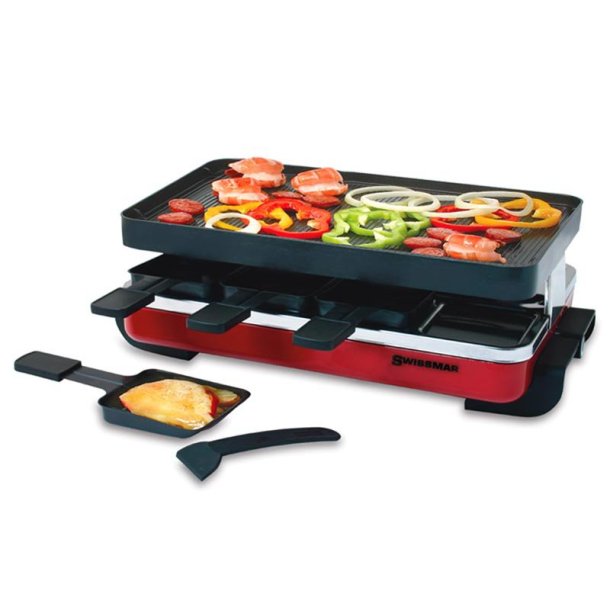 I had heard mention of a Raclette Grill once on twitter several years ago and googled it because I had no idea what it was.  I loved the idea behind it and have wanted one ever since.  Basically, everyone gathers around a table with an electric grill on it.  There are bowls of raw meat and veggies as well as potatoes, pickles, cheese, olives, and other yummy treats.  The cheese is supposed to be a special Swiss cheese called Raclette cheese which is a semi-hard, easy-melting cheese.  Everyone chooses what they want to eat and puts it on the grill to cook while they sit around and talk.  The little trays that slide under the grill are designed to melt the cheese or cook other things.  Basically you share a meal and the cooking all at the same time!

Last night, for my oldest daughter’s unexpected surprise birthday party we broke it out for the first time.  (The surprise party was unexpected since it hadn’t been in any of our plans until about 4:30 that afternoon when my daughter and her boyfriend had car trouble on their way out of town and spent the night while his car was being fixed.)  After a quick trip to the store, we had all the fixings for a mostly authentic Raclette party including Raclette cheese!  We didn’t boil any potatoes which goes against all the Swiss Raclette ideas, but we had plenty of other things.  The only downside was that even though my Raclette is considered an 8 person grill, the grill top wasn’t quite big enough to cook all the things we wanted to cook at the same time.  I’m sure that’s why they have potatoes and other sides that don’t have to be cooked.  We had peppers, mushrooms, and grape tomatoes that could have been eaten raw, but it was way more fun putting them on the grill!  Everyone agreed that it was a fun way to share a meal!

A big shout out to Candied Jansen for looking back at this blog post from last year to see if there was anything she could surprise me with for Christmas!  She got me the Kitchenaid mixer for Christmas last year, the iPod for Valentine’s Day, and the Raclette this year!  My parents got me the tool set last year and I bought myself the planner so there’s not much left on my list that I don’t own!  I guess I need to come up with another gift guide!!