Four years ago I wrote a blog post about feeling nostalgic.  Here is a portion of that post.

Another memory came in the form of a smell. I got a free bottle of Avon bodywash at a picnic. The first time I used it I smelled my Mamaw Owen’s bathroom. I loved that bathroom. It had a pedestal sink and a claw foot tub. There was a chest of drawers that had no telling how many coats of paint on it in the corner. The bathroom door closed automatically so there was a little wooden stool that she used to prop the door open. The light had to be turned on by pulling a string hanging from the bulb in the center of the room. And there was Avon. The top of the dresser was covered with bottles and tubes of powders, lotions, and shampoos, and the top drawer held even more goodies. For a little girl it was like heaven!

My grandmother raised her children in that house.  It was part of the family.  After Alzheimer’s started to weave itself through my grandmother’s memory my dad and aunt decided it was time to for her to leave that house.  She was to live with my Aunt up north.  The house was cleaned out and sold.  I knew that much of her things went with her to my Aunt’s house, but I honestly had no idea what was done with most of it.

My grandmother died in 2008, and with her death came even more nostalgia over her house and the things I loved in it.  I was sad that I would never get to show my kids some of the things that reminded me of her.  I shared my memories with them, but I couldn’t share the experiences.

This summer during our trip up north we visited my aunt.  At one point during the stay I needed to enter a room that had been closed up.  Imagine my surprise to see this sitting in the corner. 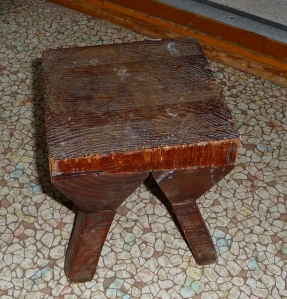 It was the little stool that had propped my grandmother’s bathroom door open.  I had thought about that silly little stool many times over the years figuring it had been given away or something.  It wasn’t good for much more than propping a door because it was so small.  Every time I had ever tried to stand on it it would fall over.  I learned from my aunt that my grandfather had brought the stool home from work one day.  I can’t imagine what grown men used the stool for.  I guess I’ll never know.  What I do know is that some day I hope to get this stool.  It’s just one of those things I’ve always wanted.

And to put the tiny stool into perspective I took a picture of Will standing on it.  Will is 5’3″.  He looks like a giant compared to the stool!  (And then he stood on it for as long as he could to practice for Survivor, because he will be on that show one day.)

Posted in Uncategorized. Bookmark the permalink.
← Wincing and Cringing
Sunshine →