This story is an oldie but a goodie.  It took place in 2005 when I was still married and living overseas.  I saw it today and thought I would repost it with a few edits. The city we lived in opened a brand new, state-of-the-art airport in 2007, so the little airport I’m referring to in this post isn’t in use anymore.
Many of you know that my entire family was able to come to Turkey to visit us for Christmas. We were really excited to have all of them here and counted down the days for 2 months! When the day finally came for them to arrive, my wasband, a friend of ours, and I went to the airport to pick them up. We needed two vans because there were 11 people coming.  Once my family landed, they had to go through the visa line, and then go pick up their luggage. They were allowed two pieces of checked luggage per passenger plus each person could bring a carry-on. That meant that, technically, there could be 33 bags to transport!
The airport here is not designed to be “passenger pick-up friendly”. For security reasons the people waiting to pick up passengers have to wait outside in a covered waiting room. The day that my family arrived was the first big snow of winter. It was freezing in the waiting room. I decided that while I was waiting I would go into the departure area to use the restroom. I had to take off my heavy coat and put it and my purse through the security screening. I walked through the metal detector and it started beeping. I went back out, took off my belt, shoes, watch and emptied my pockets into a container then walked back through the metal detector. It beeped again. I was frisked by a nice security lady who decided the metal button on my jeans wasn’t a threat so I was free to go.  I proceeded to gather all of my stuff and headed to the bathroom.  After going to the bathroom, I went back outside to the waiting room to wait.
When I saw that my family’s plane had landed, I began to watch through the exit only, sliding glass door for them to walk by on their way from the visa line to the luggage pick-up area. Trying to see anything through this door is not an easy thing to do because there are usually 30 other people trying to see through it as well, and to make things more difficult, the door is covered with a dark mylar coating to make it shatter proof. This not only makes is hard to break, it also makes it very hard to tell who the people are on the other side. There is a small, clear circle the size of a salad plate in the middle of the door for your viewing convienence. It doesn’t help much. 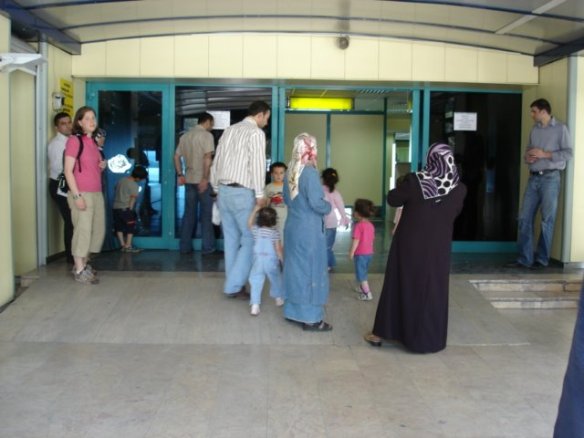 Before and after a flight arrives.  Just for perspective. 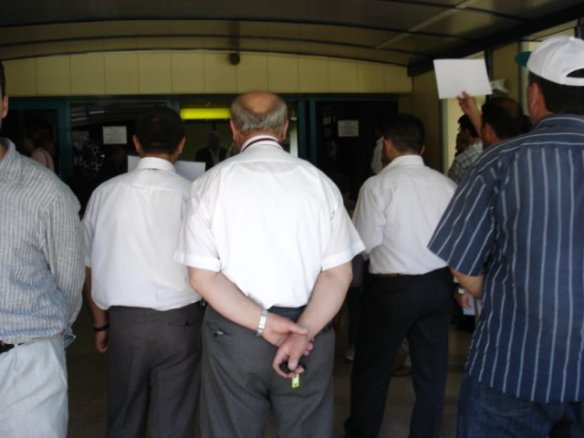 As soon as I saw what appeared to be my family, I thought that I would try to go into the airport to help them with their luggage and get them through customs. When someone approached the door from the other side, it opened and I slipped in. There was a guard standing there and he wanted to know what I needed. I explained to him that I had 11 guests arriving from America and that they didn’t know any Turkish. I pointed to my nieces and nephew, and seeing small, cute, light-haired, light-eyed children, he took pity on them and let me go help. After getting 6 large trunks, 14 suitcases plus a boxed Christmas tree from baggage claim, we headed over to customs. The customs official looked at our many carts of bags and didn’t know what to say. He looked at the picture on the Christmas tree box and asked if there really was a tree in the box. I think at this point he started to sweat. My dad had used those convenient plastic zip ties to “lock” the trunks so that the lids did not come off during transport, but so that they were easily accesible for inspection if anyone chose to do one at any point during the trip. After explaining to the nice customs man that my family had brought a Christmas tree, gifts, special food from America, and the clothing they needed for their trip he said that he would only open one of the many pieces of luggage. After scanning the multitude of bag choices, he decided to look in one of the trunks.  He glanced around and realized that he didn’t have a knife to cut the plastic tie. He pointed to an office about 30 feet away and told me to go ask the man at the desk for the knife in the top drawer. I was a bit confused but went over to the office he pointed to. The man at the desk said he didn’t have a knife so I told him that the man at the customs booth said it was in the top drawer of the desk. He opened the drawer and pulled out a steak knife! Not a pocket knife with a fold away blade. Not a box cutter with a retractable blade. A sharp, pointed blade in all of its glory for all the world to see! This, he handed to me and then I proceeded to walk back through the airport carrying the steak knife. I wondered if I was being punked!  All I could think of was that the waiting room was outside the airport for security reasons. There was mylar coating on the windows for security reasons. There are very sensitive metal detectors at all of the entrances for security reasons. But, they will give me a knife once I am inside…no problem!  I wondered if every adult in my family thought I had finally snapped when they saw me walking toward them with a knife in hand!  I’m surprised they didn’t run for their lives!  The customs official took the knife from me as if it was no big deal, opened the trunk, and figured the items in it were not a big deal.  We were free to go!
Sidenote…my family has grown so much since December of 2005, that if they were going to take an airplane trip somewhere, they would have to reserve 9 more seats than they did back then.  I can only imagine the poor customs inspector’s face if I told him there were 20 people coming for a visit which meant 60 bags!